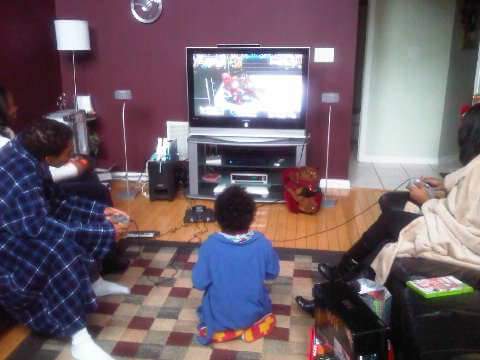 Spent time with my family in Chicago this Christmas. Far cry from what I've become accustomed to… being at home, waking up on Christmas morning, lying in the bed listening to Joseph’s and Jasmine’s early morning laughter, as they try their best to stay quiet waiting for us to come downstairs. It was like that up and until that last Christmas we had together, December 2014. Didn’t matter how old they had gotten, at 21 and 26, they would still anxiously await Christmas morning and the time we spent together celebrating and opening gifts.

Ever since they were little, every Christmas morning we would pray, read Scripture and have a morning devotional about the birth of Jesus. We would sing a song or two and then we would pass out the gifts, sometimes opening them one by one (person by person), with all eyes on one, so that we all could share in the excitement over what was under the wrapping. Joseph seemed to have a little system of opening his, choosing to unwrap the more “interesting looking” presents first.

After the gifts, someone would go and make breakfast. In the latter years, that someone turned out to be Jasmine, who had to make some new dish she discovered in her cooking ventures. And usually around that same time, just before we got to eat, Brandi and Christian would arrive, and we would do the gifting all over again.

For years, all the day long, it would simply be “just the six of us.” And we would spend the day “playing” with new games or gadgets, watching Christmas movies, maybe a basketball game or two, while Christmas music played in the background; followed by a nice spread for our Christmas feast. That last year we did ‘A Little Taste of Italy’ from the appetizers to dessert, and even had a printed menu. But this was Christmas to us. Christmas as we knew it to be. The ghost of Christmas past it has become that I have tried so desperately to escape.

Fast forward three Christmases later, but ONLY a little over two years since we lost Joseph, here we sit on a cold Chicago morning, 15° at 8:54am, so unlike every other Christmas morning that I remember. There was no Christmas tree in the airbnb that we rented for the week, nothing about it in fact, said Christmas at all. We were in what Chicagoans call the South Loop, and unlike our neighborhood at home, there are no lawns draped with Christmas décor, and hardly any holiday lights on the street that we called home this past week.

The absence of Joseph is so apparent. And as much as we try to be normal, there is no normality to our life when part of it has been stripped from our circle. Of life. My heart screams for him this Christmas morning even more so, as I think of my girls (and Christian) and realize Joe is not here again, and Christmas can never be the same. Each one will take on a different meaning and present brand-new challenges to make it through. For me. For us. And this year was certainly no different.

We’ve made the most of what we’ve had to work with the last two Christmases, mostly because of Who we know the celebration is for. Jesus. As we are reminded of the hope we have in seeing Joe again, because of the sacrifice Jesus made. Born to die, so we may live. That’s what my spirit man says. But my natural stance, says, we can’t, I CAN’T, despite our being together, help but to be mindful of who is yet missing. Joseph. Taken away far too quickly and gone much too soon.

By the grace of God, we’ve made it through another Christmas, finding joy in each of the activities Jasmine had scheduled for us, which included an escape room, the Field and Science Museums, the infamous Willis Tower with the glass floors, and an excursion through the Lost World of Jurassic Park Exhibit (something Joe would have loved). We even had the opportunity to attend our first Ballet. But the last thing we did, just the five of us, topped it off, as we had a waiter who introduced himself as Joe, at least three times. That was when we smiled and remembered that Joe was with us. And it was “just the six of us” once again, just like it used to be… even if for a moment.

Reminded me of something though, what the Who’s in Whoville sing from the popular Christmas tale of The Grinch, we got to watch again this Christmas… “Christmas day is in our grasp as long as we have hands to clasp. So, the ghost of Christmas past cannot haunt me if I continue to hold on to the hands I NOW have to clasp. And the memory of the one that I lost.

Yep. Christmas will never be the same again. I won’t hear the playful laughter of my girls and Joe having fun on Christmas day ever again. I won’t overhear their quiet chatter as they wait for us on Christmas morning. And I won’t ever be able to see the giant grin or appreciate the smile that really did light the room from my Joseph, again. At least until the time we get to see him in heaven.

And what a Christmas that will be.

Awaiting that day, in the shadow of grief,
Sis. E and Joseph's mom