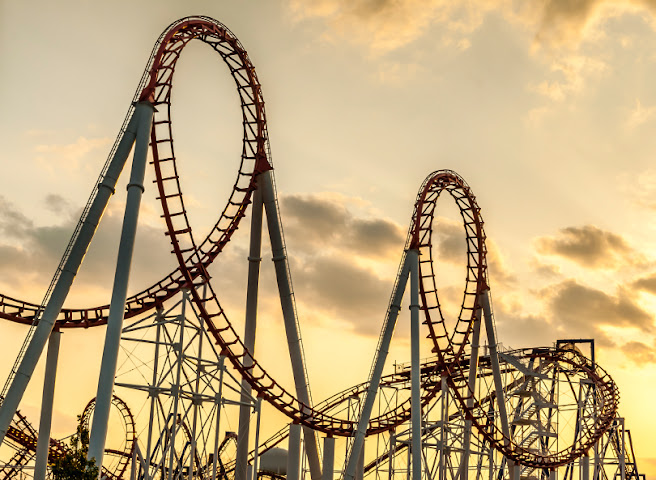 One Summer years ago, when my grandson Christian was just maybe three or four, my daughter Jasmine and I took him to his very first outing to Great Adventure Amusement Park.

We had a lot of interesting experiences that day with him.  To begin, the sprinklers at the park were on, and kids were running around playing in the water.  When we encouraged Christian to get in, he quickly shied away from it.  It was something about the water splashing in his face that he just did not like.  I suppose it was anything really getting in his face.  I remember times when my husband and I had him in the car with us and we had to keep the windows rolled up, because Christian did not like the air blowing in his face.  It was the funniest thing watching how dramatic he was, gasping for air as if he couldn’t breathe whenever the  windows were open.

Jasmine and I continued walking in the park, exploring, and stopping at times for Christian to enjoy the park.  We came to somewhat of a train ride and he dared not venture on, until I told him I would get on it with him.  And so I did, although I am not one for rides of any kind, either.  It turned out to be a smooth and a simple ride, no bumps, no curves, no spins.  Christian enjoyed it and so did I.

As we continued our stroll, we came across a tunnel slide.  Christian didn’t like that either.  Although Jasmine had climbed in before him to show him how much fun it was,  Chris simply wasn’t having it.  Moving on.

It was a few other things that day we got a kick out of for “Christian’s Day Out”.  We chuckled when he was leery about going near employees dressed up as Daffy Duck and Tweety Bird.  Christian was like, nope, I’m not doing that either.  But I suppose the best and most memorable part of our day, was when Christian went on this ride, somewhat of a rollercoaster, all by himself.  We figured since he “conquered” the other ride, this one looked okay to him.

Anyway, he got on the ride.  It went around, once, and then all of a sudden it sort of went up on a curve, just slightly (this was kiddie ride) and that’s when Jas and I, the ride operator and anyone in standing distance, heard the words, loud and clear, “STOP THE RIDE!”

STOP THE RIDE!  Christian yelled from the top of his lungs.  Stop the ride!  That was it, he had enough.   Quickly the operator turned to us as I remember signaling to him to stop the ride.  Christian had to get off.  After slowing it down, the operator stopped the ride and allowed Christian to exit.  After that, it was nearly impossible to get him to do anything else in that park that day.  Christian had enough of that ride and enough of that park.  He wouldn’t even go into the bouncy house.  That was it.  Christian’s Day Out was over and so was ours.

This is how I sort of feel over the last few days.  Since Joseph’s death I have been riding on a rollercoaster.  A rollercoaster of emotions, of ups, of downs.  Of highs and lows.  Of tears.  Of joy.   And I want to stop the ride!  I want this rollercoaster of a ride that I seem to be on to come to an end.

Coming out of Thanksgiving this year, quiet and different as it was, and now entering into my winter season of sadness… Thanksgiving, Christmas and Joe’s birthday, my emotions are all over the place.  I am joyful one moment and later on, become the total opposite as I experience these grief triggers.  And this brings tears to my eyes.  This time of year, I find myself more stressed than at any other time (except for my spring season of sadness, May-June) and my rollercoaster ride continues.

As Christian felt and did not like the wind being in his face, I feel the same way, with things that somehow trigger my grief. That those triggers sort of take my breath away, and I actually have to remember to breathe.  Inhale.  Exhale.  Just yesterday in fact, my hubby Jeff and I went and picked up a tree for Christmas.  I was happy and relieved we got a nice one and so early for us in the season.  But once we got home and actually set it up, it set me on a different course.  Seeing that tree standing, caused me to remember the time when I was decorating our tree and it fell on top of me.  It had to be a 9ft tree.  I wasn’t hurt, but I was hurting and I couldn’t even get to my phone.  It was then that Joseph came home from work and he found me on the floor with a giant Christmas tree on top of me.  We laughed after he helped me up.

It was a grief trigger that struck me from nowhere.  Like those curves on that rollercoaster ride Christian was on, I did not see it coming.  And it made me sad that Joseph was no longer here.  I was in the middle of rejoicing and appreciating our tree, and then wham, all of a sudden, remembered Joseph and that incident.  Realizing that he could never “save” me again.  Emotional rollercoaster.  Stop the ride, I want to get off.

Many of us may like rollercoaster rides, old and young.  For those that do, you can recognize and appreciate where it goes, what happens, the curves, the ups, the downs, the spins and turns, and are just thrilled at the prospect.  Screaming at the top of your lungs, with cries of joy and excitement.  But when you’re a kid like Christian was, or even someone who is on this grief journey, you don’t know where the ride is going.  You do not get to see the twists, or the spins, or the going up or down, before they happen.  You simply  have to believe that the ride will be smoother than it’s been.  You may be able to handle the slight curve, like that on a kiddie ride, but those other ones you don’t see coming, will trigger something in you to want to get off the ride.   To want to stop the ride.

This grief journey is a ride that will never stop.  As much as I want to stop the ride, I know I can’t.  I cannot yell stop the ride, like Christian did and expect the operator to stop it.  But that does not stop me from not wanting to be on a rollercoaster of emotions.  It doesn’t stop the tsunami of tears  and the great sadness that follows, it doesn’t stop the grief triggers.  But I yet want the ride to end.  At least for a little while so I can catch my breath.