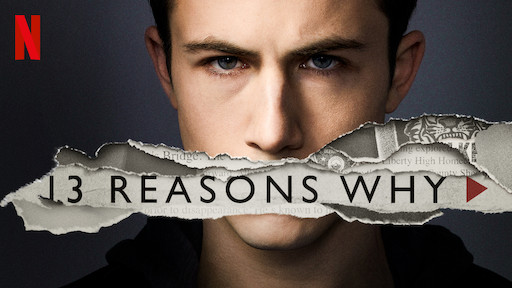 I watched or should I say binge-watched, “13 Reasons Why” on Netflix, just over the summer.  At the time when I was watching it my emotions had been all over the place.  But this time, THANK GOD, I was in an UP period.

As the show begins it gives you an out.  A waiver.  A disclaimer.  A strong advisory.  ‘This show deals with suicide, and thoughts of suicide.  If you or anyone you know have these thoughts, do not watch it or do not watch it alone.’   I think it is a great advisory and truthfully all shows on TV should come with some sort of disclaimer like this.  Warning the viewer of what they are about to see.  Without going into detail, some things we need to be warned about.   Especially these days.  Since “everything” has to be included.  Moving on….

But the show sends a warning to the viewer that what they are about to see, deals with suicide.  And that it does (spoiler alert).
The show is centered around a teenage girl who committed suicide and prior to doing so, lists  the 13 reason why she felt the need to do it.  Without going into it too much, certain people (including friends) find out that they were one of those reasons.

What a terrible thing to find out, to discover, that you were one of the reasons that someone would choose to die.  That someone waited until they took their own life to tell you how they really feel.  How you really made them feel.  Not that you are responsible for what someone feels, but yet I beg to differ.  You.are.

God has placed each one of us into the life and/or lives of other people.  You’ve heard it said often enough, I’m sure… no man is an island.  God allows our paths to cross with the paths of others for various reasons.  Sometimes they are simply to cross, just so someone can see a smile, feel a touch, hear a friendly voice.  Other times people are in our lives so that we can make a difference in how they think, how they process things, how they interact with others.  Sometimes it is so that we can learn valuable lessons or speak of shared experiences.  And sometimes it is so that we can just show that person some love.  Some kindness.  Show them that someone cares.  Most times that is all that people need to know is that.  Someone cares.  That they are important.  That they matter.  To someone.

We never really know how or will never know why someone chose to take the route of suicide.  Just the thought that someone could be so lonely in their thoughts, in their heads, at best, scares most of us.  At worst, makes us feel vulnerable.  So we often run from it.  Shirking the responsibility off on someone else, or worse, to themselves.  The lonely (or depressed) individual who simply needs affirmation.  “I am not responsible for how someone feels,” I hear.   No you are not, directly, but you are responsible for helping them to continue to feel that way (or not).  You may be responsible in changing a thought or opening an eye to someone’s pain.  There is a reason God expects us to be our brother’s keeper.

Kate Spade, the designer, had a husband and nine-year-old daughter when she committed suicide earlier this year.  A note was found , although the police never revealed  (to the public, anyway) what was in it, as to why she did it.   Why would a successful woman whose business was thriving, who had a daughter that I’m sure loved and depended on her, and a husband … why would she commit suicide?  From what I’ve learned, she and her husband had a few marital issues, but they were nothing to consider suicide you would think.  Or maybe they were.  To her.

We don’t know what captures the mind of a person.  Why they respond the way they do to things.  Why some things hurt and others don’t.  Why it matters.  There are so many factors to consider.  There was a part in the movie, which I won’t share in detail, where things someone else wouldn’t even be moved by, troubled her.  We are all wired differently, but we yet connect in so many aspects.  Even if unhealthily.

Certainly, problems in marriage, a lack of communication, someone not feeling attractive or wanted, having low self-esteem, could be more than enough for someone who battles with depression to consider suicide, but as I thought more of this, why wasn’t the love for her daughter enough?  (But that’s my thinking).  Maybe suicide is a selfish thing.

And I suppose in some ways it is.  It is taking an easier way out for yourself.  But it is a permanent escape from a temporary problem.  I believe people who battle with depression and suicide, don’t really want to die, they just don’t want to live with the pain they are going through, no matter what the cause may be. No matter the reason(s).

In my walk in this shadow of grief, I have come across quite a few mothers who have thoughts of suicide, who have actually attempted (and succeeded) suicide, because the pain in losing a child is a far greater weight than one can imagine.  I know this for a certainty.  Many times, medication is a MUST to escape the pain and the thoughts that come along with this grief.

There are people who suffer with depression, like I often have and do, like the girl in the movie, because they want so much to be loved.  People who are searching and longing for someone to notice them.  To be a friend.  To talk to them.  To see them.  To love them.  And because they don’t get the attention they crave, they feel non-existent, as if their life does not matter.  And eventually they believe it so much, it becomes real.  And there is no way out to them, but suicide.

This is the holiday season and unfortunately as we get closer to the day, it will bring a whole wealth of emotions for many who battle with depression and thoughts of suicide.  And so I appeal to you all today. Pay closer attention to those around you.  Look a little harder and a little longer in someone’s eyes.  They truly are the window to the soul.

We really never know what people are going through.  Many do not share it, choosing instead to fake it.  Wearing a smile on the outside, when inside, that smile and everything they know are turned every which and what way.  Give a little more these days.  Stretch yourself a little further to help somebody.  Smile more.  Speak words of kindness and affirmation.  Somebody needs you.  You.
In spite of what people declare, especially those who are “self-acclaimed”, you are responsible for someone else.  It’s selfish to believe otherwise.  Ultimately yes, they are responsible for the decisions they make, but you can make a deposit in that decision process.  You can have a say in what they decide.  In what they hear.  In what they feel.

In the shadow of my grief,
Joe's Mom