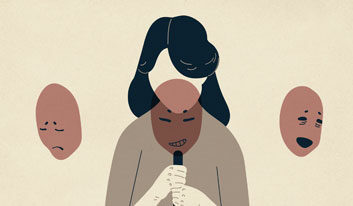 Many years ago, there was a song called The Great Pretender sung by the Platters.  Many of you know me personally and know that this song is not quite my generation.  I belonged to the more disco and original hip hop era.   Anyway, one morning during my devotional time with the Lord, God spoke to me and said that’s what you have been these days.  The Great Pretender.  As I was taken aback a bit, the Lord told me, as He often does in situations like this, look up the words.  And so, I did.

Oh yes, I'm the great pretender.  Pretending that I'm doing well.  My need is such, I pretend too much.  I'm lonely but no one can tell….

I stopped there and questioned the Lord a bit, reminding Him of just how real I have been.  Am I not honestly telling people how I feel?  Am I not telling them what this grief walk is really like?  Am I not yet declaring the Truth of Your Word?  How am I pretending, Lord?”  And the Lord answers because He knows everything.  “You seem to be, what you’re not, you see… you’re weary, but no one can tell.”  Yes, you are doing all those things, but at the same time, you are yet holding back.  You’re only telling half the story.  You’re giving them glimpses of what it’s like, but not presenting a full picture.  You’re only telling what you want them to know.  Amid everything that I am bringing you through, you are pretending that you’re doing well.  You’re pretending that everything is yet okay.  Yes, I am good.  Yes, I am God and people need to know that.  But if you hold back the depth of your pain, you will be holding back the depth of MY deliverance.  Stop covering up the wound.  You will not heal completely, if you keep hiding what really hurts.  Reveal it.  Be honest with yourself.  Be honest with Me.  Let others know that you are not okay, but you can be.  You shall be.  Confront the pain so it can be dealt with.  Pain is not pretty.  Glossing over it does not help you, just like semi-gloss.  It doesn’t make anything look better.  It doesn’t hide imperfections.  It merely tries to give it a shine.  This is REAL TALK.

Ouch.   Oh, yes, I'm the great pretender.  Adrift in a world of my own.  I've played the game, but to my real shame.  You've left me to grieve all alone…

You see it was just a week ago that I found out about the death of Anthony Rodriguez, my neighbor’s son and a childhood friend of Joseph’s. To hear him tell it, as he relayed at my Joseph’s funeral, Joseph was his best friend and they became friends, simply by riding their bikes together in a circle, for a week.  😊  That’s what he said.  And they remained friends throughout high school.  So Joseph’s death hit him hard. His mom told me of how he struggled with Joe’s death and even just talking about him.  She told me how Anthony wore the green bracelet every day, that the New Jersey Sharing Network gave us for donating his organs, and how much Anthony loved and guarded the bowtie of Joe’s he wore to Joe’s funeral and how no one could touch it or Joe’s funeral program.  It was because of Anthony and Joseph that my family and I became friends with the Rodriguez family.  He was our neighbor, he was Joseph’s friend and he was only 24.  The age Joseph would have been today.

I had heard that Anthony went into the hospital complaining about a headache only to never return home.  He died June 10th of unknown causes, just two years and five days from the date Joseph died.  His death hit us almost as hard as it hit his family, as we relived every single moment of Joseph’s last days leading up to his burial.  So many similarities between the two, the timing, the people, the service… the last time we walked into that church was the day we buried our own son.  Have not been there since and here we were having to come face to face with this again.  And the pain remains the same.   Yet another person had to bury their child.  Their 24-year-old child with a lifetime of things to accomplish and memories to make.  Just like my Joseph.  “These things should not be,” I repeat to the Lord, for them, as I have done for us countless times before.  A parent is not supposed to bury their child.  And so, as I woke up this particular day, I could not help but feel tired.   I could not help but feel bloated, overwhelmed, shaken.  Weary.  Once again overshadowed by grief.

For two years I have struggled with Joseph’s death.  I still have my questions.  I still have my doubts.  In the midst of my joy, I still cry.  I still sit awake some nights.  I still want to hide and stay in the bed some days.  Losing a child, grieving a child is like a never-ending nightmare.  You sleep, and then you wake up to find that the nightmare is real.  Your child is still gone.  What you believed could never happen, would never happen, happened and you are yet here to face it, to continue to live it, every day God gives you.

Too real is this feeling of make believe.  Too real when I feel what my heart can't conceal.

And as much as I fight to overcome on a daily basis, sometimes moment by moment, I am yet faced with the harsh reality of this is how it is.  And so, I continue to push.  I pretend.  I put on the smile that I’m expected to wear.  I put on the clothes that help to brighten my spirit.   Wear my bowties in every way I could find, in my ears, on my fingers, on my neck, on my nails, on my wrists, with my wallet and pocketbook.  I do the things that seemingly make me happy or used to, like shopping, puzzles or silly little Facebook games.  And all the while I still have this thing gnawing at me called grief.

Yes, I'm the great pretender.  (Just like the Lord said).    Just laughin' and gay like a clown.  I seem to be what I'm not, you see.  I'm wearing my heart like a crown.  Pretending that you're still around.

And then as I do, and as God did for me, with the comfort that He has given me, I may be able to be a comfort to others.  Without reservation and without pretense.

No more great pretending for me.