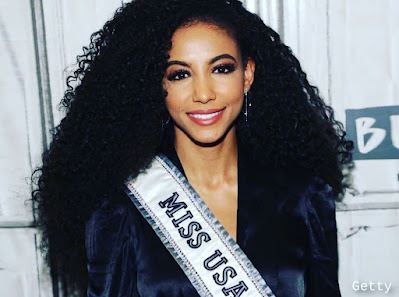 The death by suicide of Miss USA 2019 Cheslie Kryst really struck me this morning.  Cheslie was just 30years old.  This comes on the heel of the suicidal death of Ian Alexander, Jr., just 26, son of actress Regina King.  From all the pictures of both, if you check out their social media accounts, you would never guess in a million years that they were dealing with some sort of mental health issue.  They both had these tremendous smiles that were described as, “brightening a room, when you saw it.” And they were both surrounded by people who loved them.  Working for them, with them, celebrating with them for their accomplishments.    Both deaths, unexpected in every regard.

In her young life, Cheslie Kryst was an attorney and a correspondent for Extra TV.  She was a fashion icon, who recorded video blogs on her YouTube channel, and wrote a blog entitled “White Collar Glam” encouraging and offering other young woman, fashion design tips on clothing, jewelry, hair, and makeup.   Some of the items that she sold and put together were for sale on her Amazon storefront.  And Cheslie was an encourager.  In an interview with a Dress for Success ambassador, one of the things she said was “If you fail or things don’t go your way, don’t RSVP to the pity party.  But instead find the lesson in it and celebrate the failures.  They will help you go to the next level.”  In her last Instagram post, she wrote to her followers, “May this day bring you peace and rest.”  This from someone who takes her own life.  Just hours later.  Bright, beautiful, young, encourager, advocate of (black) women, fashion icon, attorney, news correspondent, beauty queen.  Not what or who we would picture as not happy.  Or depressed.  Or lonely.  Not what we would expect.

I shared some time ago about suicide and the feelings and emotions that go before it.  The depression, the feeling of abandonment, the invisibility one experiences, not feeling like you matter to anyone, not even those who are closest to you.  The dread of sometimes how we look to others, or even how much better someone is than us.  It’s an array of feelings and emotions and doubts and insecurities and pain.  So much pain.  And it doesn’t matter who you are, what you do or who you know.  The celebrity deaths of Robin Williams, Kate Spade, Bobbi Kristina Brown, Anthony Bourdain, and even Marilyn Monroe garnered major attention because it was so unexpected.  These were people who were doing a lot of things and they were surrounded by people who loved them, who knew them, but never saw it coming.

Mental illness is not just the person walking around talking to themselves, like some of us might believe.  They are not “crazy” people.  People who deal with mental illness or some sort of depression experience thoughts that we, especially those who are “strong” fail to understand.  But mental health is just as important as physical health.   If you see someone hurting in their body, you would help them.  And while mental illness is often hidden, we may not see it in ways we expect, it may still very well be visible.  To those that can hear.  I believe mental illness comes out in a language.  People speaking, I am not good enough.  No one loves me.  Nothing ever seems to work out.  She’s better than me.  Or why can’t I be beautiful or lose this weight?  Even as miniscule as that.   It’s a constant battle in their minds.  A constant battle of thoughts that their life does not matter.  In some way or another.  We just don’t know what people are thinking.

I mentioned this before and many might be aware, that since losing my son, Joseph, in my walk in this shadow of grief, I have come across quite a few mothers who have thoughts of suicide, who have actually attempted (and succeeded), because the pain of losing a child is a far greater weight than one can imagine.  I am certainly praying for Regina King, and April Simpkins (Cheslie Kryst’s mom) for this unbearable pain, that I know all too well.  Many times, medication is a MUST to escape the pain and the thoughts that come alongside grief of this nature.  But I also know that if it were not for my ability to express my pain and my grief, most times, I would be overcome. And I thank God for those who have listened and gave me the audience I needed.

“One Reason Why” is a blog I wrote a while back, partly based on the Netflix series, “Thirteen Reasons Why.”  Feel free to read it, but my purpose for writing it was to bring awareness to suicide and as to why people commit to do so.  In the show the people found out why.  And came face to face with some bad things, having to live with the regret that they could have done something differently.  We all have a role to play in the life of someone else, whether we believe that or not.  You ARE your sister’s keeper.  Your brother’s keeper.  Be kind.  Smile when you can.  Lend an ear.   Be present.  Open your eyes.  Pain is visible if we are open to see it.  It has a face.  It has a story.  Yes, we have our own issues to deal with, so we certainly don’t want any more.  But realize, that may very well mean life or death.

Please don’t ignore the signs.  Don’t ignore the cries of people who cross your path.  Friend or Foe.  Both of these young people had their whole lives set before them.  Lives that appeared to be full of hope.  Something went badly wrong.  Mental illness is real.  Mental health is vital.  Do your part in whatever way you can.

If you or someone you know is struggling with mental health issues and thoughts of suicide, or if you simply need someone to talk to, please reach out to the National Suicide Prevention Lifeline at 1-800-273-8255, 24 hours a day.